Angkor Thom was the last and most enduring capital city of the Khmer empire. It was established in the late twelfth century by king Jayavarman VII. It covers an area of 9 km², within which are located several monuments from earlier eras as well as those established by Jayavarman and his successors. At the centre of the city is Jayavarman's state temple, the Bayon, with the other major sites clustered around the Victory Square immediately to the north.

Angkor Thom (Big Angkor) is a 3Km walled and moated royal city and was the last capital of the Angkorian empire. After Jayavarman VII recaptured the Angkorian capital from the Cham invaders in 1181,he began a massive building campaign across the empire,constructing Angkor Thom as his new capital city. He began with existing structures such as Baphoun and Phimeanakas and built a grand enclosed city around them, adding the outer wall/moat and some of Angkor ‘s greatest temples including his state-temple, Bayon, set at the center of the city. There are five entrances ( gates ) to the city, one for each cardinal point ,and the Royal Palace area. Each gate is crowned with 4 giant faces. The south Gate is often the first stop on a tour of the temples. 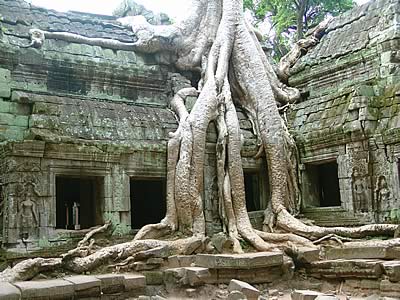 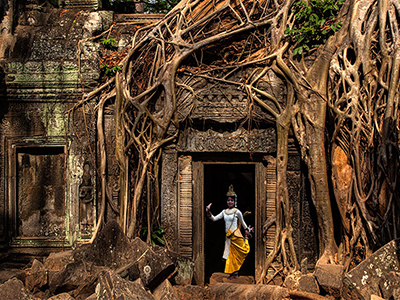 In the afternoon, you will visit the Ta Prohm Temple. This temple is well worth an extended exploration of its dark corridors and open plazas .Ta Prohm was one of Jayavarman VII’s first major temple projects .Ta Prohm was dedicated to his mother (Preah Khan, built shortly after Ta Prohm in the same general style, was dedicated to Jayavarman VII’s father.). Ta Prohm was originally constructed as a Buddhist monastery and was enormously wealthy in its time, boasting of control over 3000 villages, thousands of support staff and vast stores of jewels and gold. Of the monastic complex style temples .

On the same way we detour to visit Angkor Wat. The Angkor Temple is visually, architecturally and artistically breathtaking. It is a massive three-tiered pyramid crowned by five beehive–like towers rising 65 meters from ground level. Angkor Wat is the centerpiece of any visit to the temples of Angkor. At the apex of Khmer political and military dominance in the region ,Suryavarman II constructed Angkor Wat in the from of a massive ‘temple –mountain‘ dedicated to the Hindu God Vishnu. 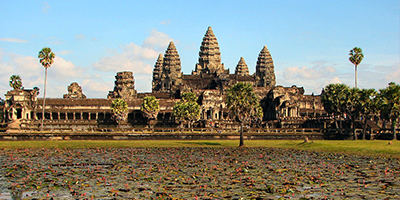 Angkor Wat is surrounded by a moat and a wall measuring 1300 meters X 1500 meters .The temple itseftis 1 km square and consists of three levels surmounted by a central tower. The walls of the temple are covered inside and out with bas-reliefs and carvings.