Ancient Angkorian Capital
Our tours are designed to give you a good view of the architectural development and a clear explanation and discovery of the numerous Angkor Wat Temples.

Begin by visiting some of the earlier temples in the Angkor Thom area: 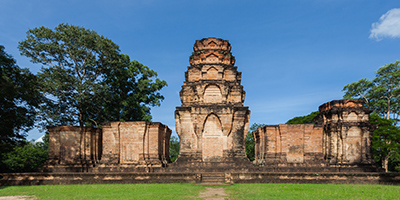 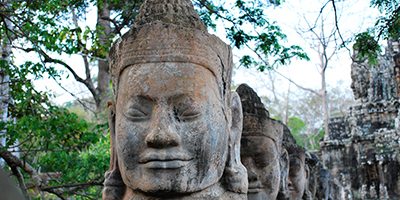 Early Morning: Breakfast at Mom's GuestHouse in Siem Reap and get ready for the sunrise.

Transportation to the Angkor Ancient City and Sunrise over the main Angkor Wat Temple.

After the sunrise, you will explore the temples of the last Great King in the reign of the Kingdom of Jayavarman VII (1181-1219)

Starting from the south gate of Angkor Thom, you will be guided to the famous Bayon, a well-known and richly decorated Khmer temple. Built in the late 12th century or early 13th century as the official state temple of the Mahayana Buddhist King Jayavarman VII, the Bayon temple, with its 52 towers, stands at the centre of Jayavarman's capital, Angkor Thom.

Afternoon: You will discover the Thommanon temple, Chau Say Tevoda and the Ta Keo temple, a symbolic depiction of Mount Meru, home of the Hindu gods (begining of 10th century, King Jayavarmans V. (889-900).

You complete your 2 days Angkor Wat Temples Tour with the magnificinet Ta Phrom jungle temple. The photogenic and atmospheric combination of trees growing out of the ruins and the jungle surroundings have made the Ta Phrom temple one of Angkor's most popular temples with visitors. 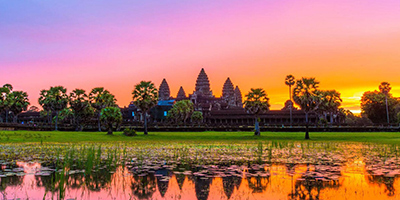 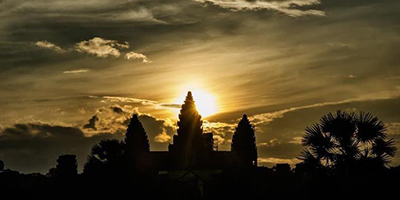 Kbal Spean ("Head Bridge") is an Angkorian era site on the southwest slopes of the Kulen Hills, 25 km from the main Angkor group of Siem Reap.

Kbal Spean, commonly known as the valley of a 1000 Lingas, consists of a series of stone carvings in and around the Stung Kbal Spean river. The motifs for the stone carvings are roughly three: myriads of lingams, depicted as neatly arranged bumps that cover the surface of a rock; lingam - yoni designs; and various Hindu mythological motifs, including depictions of gods and animals.

Banteay Srei (or Bantey Srey) is a 10th century Cambodian temple dedicated to the Hindu God Shiva. Located in the area of Angkor in Cambodia, it lies near the hill of Phnom Dei, 25 km (15 miles) north-east of the main group of Angkor that once belonged to the medieval capitals of Yasodharapura and Angkor Thom. Banteay Srei is built largely of red sandstone, a medium that lends itself to the elaborate decorative wall carvings which are still observable today.

The buildings themselves are miniature in scale, unusually so when measured by the standards of Angkorian construction. These factors have made the temple extremely popular with tourists, and have led to its being widely praised as a "precious gem", or the "jewel of Khmer art."

Back at your accommodation in Mom's GuestHouse in Siem Reap. 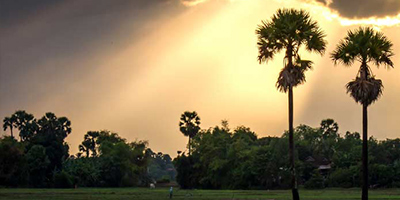 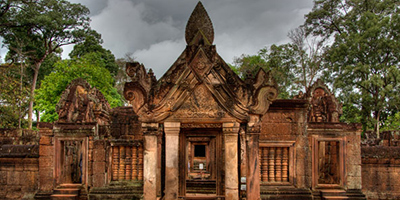 Morning at the Roluos Group: Starting with Bakong, the first temple mountain constructed by rulers of the Khmer empire at Angkor. In the final decades of the 9th century A.D, the Roluos Group, 15 km east of Siem Reap, served as the official state temple of King Indravarman I in the ancient city of Hariharalaya.

Roluos Group was the capital of Indravarman I (877 to 889). These were the first temples built to last and are made of brick with some carved plaster reliefs. The group is made up of the three temples of Preah Ko, Bakong, and Lolei. Many of the later temples in the Angkor group are based on these earlier temples.
Back in Siem Reap and have your lunch at a local Khmer Restaurant.

Afternoon : Cruise on the great Tonle Sap lake to see the floating villages and fisheries. Visit the nearby floating village of Chong Kneas, including schools, restaurants, shops and even all moored in the middle of this massive lake. 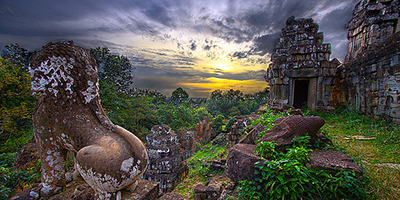 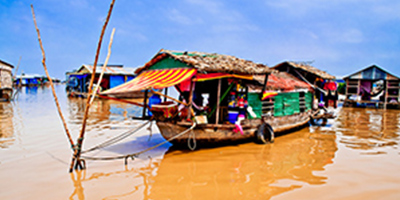